With levels of waste plastics rising in the UK as a result of China’s National Sword scrap import policies, the debate is picking up over what to do with them. Landfilling, rather than incineration, might be the better option, suggests Keith Freegard, Axion Director.

China’s crackdown on imports of contaminated recyclables is leading to an ever-increasing stockpile of waste plastics materials worldwide. Tackling this problem waste stream will probably lead to increased incineration of waste to produce energy as the ‘best’ solution. An attractive option perhaps, but when the carbon produced by that process is taken into account, is it really the best environmental solution?

Creating energy from waste also produces between 25% to 30% residual incinerator bottom ash (IBA), which still requires waste disposal or long-term storage. Although generating heat and power from waste sounds appealing, it is inefficient when compared to burning gas in a modern generator system. Burning natural gas also produces fewer emissions and there is nil solid ash waste to dispose of.

The carbon release from waste incineration needs to be considered and compared to the alternative methods of generating an equivalent amount of electrical power. Typical Energy from Waste plants have efficiencies of up to 30% for converting feed material into electricity; in contrast, a modern Combined Cycle Gas Turbine’s efficiency is typically about 50%. As shown in below, this disparity in efficiencies means that producing 1 MWh of electricity from a CCGT produces just 40% of the CO2 emissions for the same amount of energy made from plastic incinerated at an EfW plant. 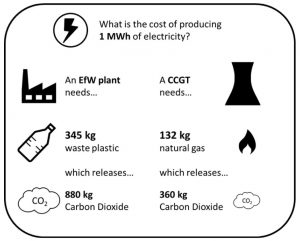 It is true that a best-in-class EfW plant with integrated heat recovery (i.e. CHP plant) can recover a further 35% of the available energy from the waste fuel; however, this heat could instead be generated by a natural gas boiler that has an efficiency of at least 90%. Even taking this additional heat-efficiency into account, a combination of CCGT and boiler still only emits about 65% of the CO2 of the leading EfW plants.

Using the CO2 metric alone suggests that it makes more sense to bury large amounts of plastic in a long-term ‘carbon sink’ in the ground and efficiently combust natural gas to satisfy our immediate power needs. However, until world leaders are prepared to transform the taxation on fossil-based fuels in a way that truly reflects the high environmental cost of ‘free carbon release’, then this numeric analysis remains an esoteric academic study.

Perhaps we should start by calling end-of-life waste incineration technology ‘sky-fill’ to compare it with the alternative ‘land-fill’ disposal route for plastic-rich carbon mass?

Having first raised the ‘landfill or incineration’ question more than 12 months ago, I still believe that the best environmental option may well be to store the waste plastics in a controlled landfill facility and then to ‘mine’ them back at a later date when new re-processing capacity becomes available. Effectively acting as a long-term ‘carbon-sink’, these plastic materials could be extracted for recycling in the future if a new-process made this both technically and economically viable at that time.

Climate change concerns us all and efforts to control rising global temperatures have included a focus on the uncontrolled burning of fossil fuels in many parts of the world. The huge shift in corporate and national energy-habits required to leave fossil fuels in the ground will only happen with a Carbon Tax placed on the generation of electrical power that is directly linked to the tonnes of CO2 released into the atmosphere per unit of power created.

If that happens, it might then be the time to return to that ‘mine’ of carefully stowed thousands of tonnes of good plastic and look again at the economics of turning it into new polymer. With a huge carbon tax slapped on burning it, then the economics would probably work. So these plastics may not have to stay in the ground for too long.

Looking at the bigger picture, we should all be concerned about the wholesale damage to our planet caused by the completely uncontrolled burning of fossil fuels. That’s what we’re doing when we’re burning plastic that’s encapsulated amongst the mixed MSW we put in our black bin bags.

The short-term political and economic viewpoint is that ‘we’re getting some electrical power from it so it must be a good thing to do’. But this I think reflects the market failure created by our currently very high landfill taxes that are not balanced by an equivalent taxation method to discourage free ‘sky-fill’.

It’s a complex and challenging issue that reaches out over the next 20 years; a critical period in our history. Until we get a carbon tax that puts some seriously big pound notes on the cost of throwing carbon into the atmosphere, I don’t see there being any real change. After all, the Earth doesn’t have a bank account – it’s only us humans who operate under that monetary metric.